After a few days, I started this exercise again, and looked at different scences within the picnic scene, including the couple, and the single person at the right hand corner. 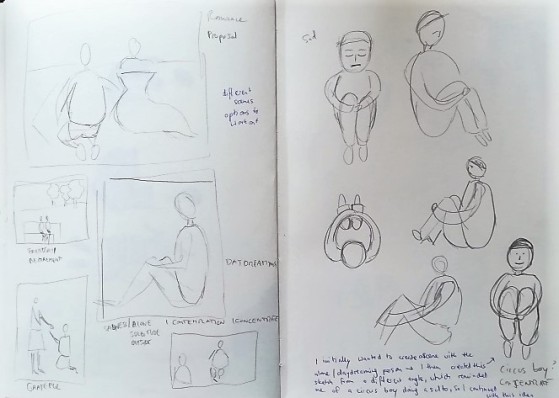 The last sketch I did on the second page was a different perspective from the single person at the picnic. I sketched him from front instead of the side, and the idea of a circus boy in a mid-salto move came to my mind. The other sketches were quite sad (they all refered to the idea of being sad, alone, lonely, etc.) and I wanted to a happy illustration.

I decided to work out this idea a bit further, and sketched different perspectives of the salto, and ideas for compositions into my sketchbook.

Similar to the photograph, I wanted to create the circus boy in a blue costume with stripes. I did some inital sketches using different materials, like guoache, watercolours, colour pencils to work out some options. I also looked at some ideas for the background. I wanted to make it colourful, and in contrast to the blue figure. I wanted to create a background with “lights” only, and came up with the idea to use overlapping lights from different headlights, where the resulting shapes would change the colour.

I continued with the actual illustration on thicker paper because I wanted to create the background with watercolours to create this faded, washed-out effect, kind of flickering lights. I captured the different stages of my work in progress here: 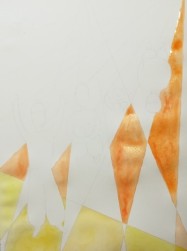 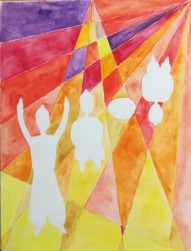 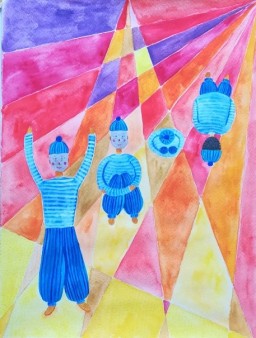 Fun fact: While I initally planned to have more of a yellow-orange colour scheme, I ended up with more red, purple colours. I might have been inspired by the tulips on my table where I was working. The tulips were coincidentally also called Harlequin. That’s why I then dubbed my piece “Harlequin”, too.

The exercise asked to turn the final illustration into a poster and include the title that was given to the cut-out from the photograph. I did some small edits with photoshop, mainly to blend the edges to the end of the frame, increase the contrast, and in the end, I deced to add the title at the bottom. I didn’t want to include it in the picture because I thought it would draw the attention away from the illustration. I tried out different options for the font, and where to place it: 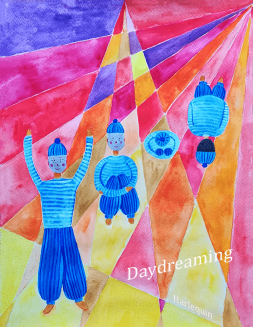 Take a look at my final result for Daydreaming (Harlequin):

One thought on “Key Steps in Illustration: Image Development, Pt. 2”

This site uses Akismet to reduce spam. Learn how your comment data is processed.